A few of us on XBOX Live were discussing how nice it would be to have an application that you could have on your desktop that would notify you when one of your friends was online playing a game.  We kicked around a few ideas and we ran into several problems along the way.  Since the XBOX Live website doesn't offer web services we have to resort to screen scraping.  From there, there's the problem of the fact that it's an SSL site that uses passport.  Using System.Net.HttpXXXX doesn't appear to work nicely with that.

Without giving away too much about what is coming, here's a screen shot showing a sort of prototype application that shows that I'm monitoring your friends list ;-)  Lemme know what you think.  James Avery and I are working to put together something that notifies you in the same manner that Windows / MSN Messenger and Office System 2004; using toast.  As I put this prototype together, I've been mentally coming up with a few other ideas as well. 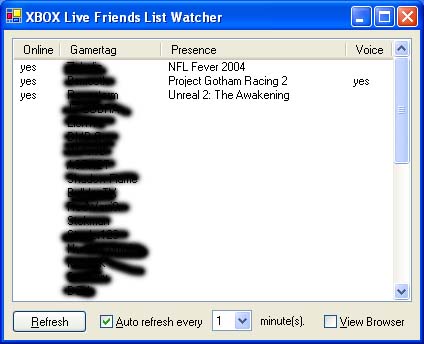 [update] Completely rebuilt the UI.  Wasn't really keen on the whole ListView idea, so rethunk how I would like to see people online.  Then, bham!, it was staring me right in the face.  Windows Messenger.  Group the gamers by what games they are currently playing.  Simple.  Some portions aren't working just yet (colapse, expand, and scrollbars) since I'm writing a custom control to implement the view list.

[update] For those finding this page and aren't looking through the rest of this site, be sure to check out XboxFriends.com for the current release of this product.

I installed Windows Vista Ultimate (x64) last night and everything went pretty smoothly.  This, of course, is on the second machine I have on my desk so I can see what works (and doesn't) ...

While working on the xbox friends thing, I decided to create a clone of the user interface that Windows Messenger uses.  It's sort of like a treeview (or group box) and has a vertical scrollbar vis...

XboxFriends and ASP.NET vs. WinForms

Spent the weekend trudging through ASP.NET working on bringing some of the features of the XboxFriends desktop application to the browser.  Currently there are only two people using the new ve...

[How To] Check to see if Visual Styles are enabled