I've been using a power toy from Microsoft called SyncToy v1.0 for Windows XP for some time now.  It works great for syncronizing various file types between multiple machines.  In one example I syncronize a projects folder across 5 machines (3 laptops and two pcs) so I can work on these projects on whichever machine I feel like doing so at the moment.  I also use it do some syncronizing of video files recorded with Media Center Edition to the laptop(s) so I can watch these videos on the go.  Of course, by syncronizing, I'm meaning that it only has to copy what is different; thus reducing the copying time.

Before I move on to what the problem is, let me show you two screen shots. 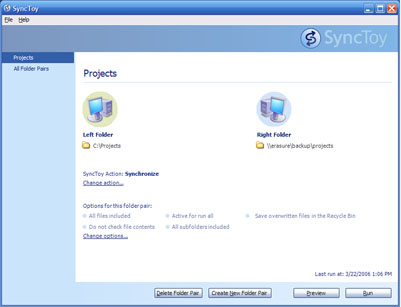 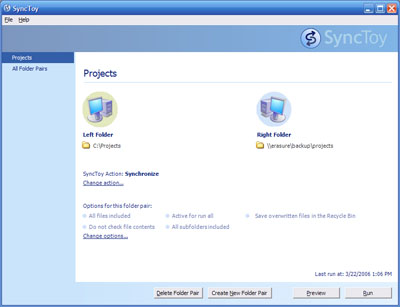 See any difference in the UI?  (Hint, look at the buttons.)

Then, to me, there's just some things it should do.  First and foremost, it should look like something that is designed to run on Windows XP; meaning, it should utilize XP Visual Styles.  Obviously it was done correctly in 1.0; but for some strange reason this somehow got “removed” from the 1.1 version.  Why?

What I installed this new version on a new machine, I thought I had some sort of configuration problem.  At first I didn't realize that there was a new version and running the 1.0 version on one machine looked correct and on the new machine (running 1.1) the buttons, listview, etc. were using the non-visual styles UI elements.  Once I realized that the “new” version somehow dropped this; I had a WTF moment.

Yeah... I know it's a free product... but come on... XP has been out for how long now?  You'd think that XP Visual Styles would be the norm in software today... even more so... you'd think that if it supported visual styles that it would have continued to support it as a new version was released.  Grrrrrr!!!

Note: As this is a visual issue, this doesn't mean I'm going to stop using the tool.  It's just downright annoying.  If you haven't looked at the power toy... do yourself a favor and do so.  Lots of options to handle lots of scenarios.

(And for those reading my blog for a while... yes, this isn't the first time I've pointed this type of thing out.)

After running Vista x64 on another machine for a few days; installing various pieces of critical software and seeing that everything seemed to be working smoothly... I've made the full leap on ...

Why aren't there any decent audio libraries for .NET?  Don't get me wrong, it's nice that the framework supports some audio features in a very simple way if you want to just play s...

OK, I knew that there was this thing called System Restore in Windows XP... however, I've never really needed it.... well, until now ;-) I installed an application developed by a co-worker and it b...