Cory Smith
AddressOf: Visual Basic
(On .NET, of course!)
Posts All I can say is "Huh?"
Post
Cancel

OK, so I took the step forward and decided to live on the uber bleeding edge.  As you can see from the image, I decided to go ahead and install Microsoft Visual Studio Codename Orcas Beta 1 on my main machine.  Yes, the same machine I'm running Vista x64 on.  The biggest reason for doing this is the "support" in Visual Studio 2005 for WPF is, ummm, let's just say lacking.  So the first thing I do after completing the install is create a new WPF Application project and what do I see?  (Look at the photo.) 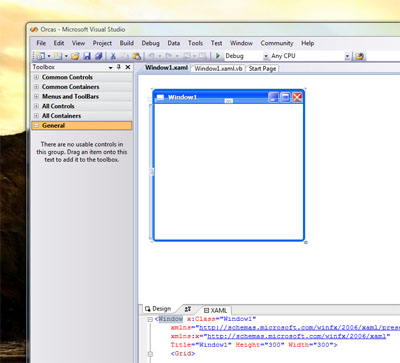 Now don't get me wrong, I am completely aware that this is a beta.  Yes, it's a relatively early beta.  However, considering that WPF is installed by default on Vista and Vista (I would assume) is the short term future for Microsoft (over the next 5 years or so if recent release track times withstand)... wouldn't you think that the WPF designer would at least look like Vista on Vista?  What is this TONKA TOY crap doing on my beautiful desktop?

At least when I launch the application, the window border looks as you'd expect.  Whew!  Scared me for a moment. ;-)

I haven't gotten much further than this, so stay tuned for further details as I progress forward.

Why aren't there any decent audio libraries for .NET?  Don't get me wrong, it's nice that the framework supports some audio features in a very simple way if you want to just play s...

If your in the Dallas area (or more specifically, the North Dallas area), swing by NDDNUG tonight for my presentation on developing for Windows Vista using Visual Studio 2005.  (Of course discussin...

How NOT to do single assembly deployment.

I applaud this guys enthusiasm, however, his discovery/technique is something I would strongly urge you to avoid.  There are two major reasons for this: Doesn't work as a "regula...