This is just a quick reminder regarding the Action Movie Night taking place Saturday evening, May 5, 2007, starting at 6:00pm located at my house so space is limited to those that RSVP.  The movies being shown are: 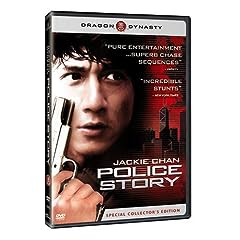 For those unaware, Jackie Chan essentially redefined a genre with the release of Police Story in 1985 when he decided, after being completely frustrated during The Protector, that he could do a police action movie better than Hollywood.  Last month we watched Rapid Fire (Brandon Lee) in which they used a stunt that was originally in Police Story (and used again in several other movies).  Police Story set the stage for police action movies to follow and, as such, deserves a place of honor for action movie enthusiasts.  Inspector Chan's story continued through the release of six additional movies;  Police Story 2 (1988), Supercop (1992), Crime Story (1993), Supercop 2 (1993), First Strike (1996) and New Police Story (2004).

Obviously it would take a while to watch seven movies, so we are just going to watch the beginning and latest movie in the series.

In addition to the movies, I’ll also be firing up the grill for a grillin’ session.  This will start around 4:30pm and everyone is invited to bring their own slab of meat and try their hand.  (It’s a guys night, so no one is going to do the cookin’ for ya… besides… didn’t I mention that it’s a guys night… we are all supposed to love to grill, right?)  Some side dishes will be prepared to go along with your charred masterpieces.

Due to the nature of the movies being shown (and potentially being shown in the future), this event is limited to guys who are 18 or older.  (It's a guys event... so leave the wives and/or girlfriends at the homestead.)

If you'd like to attend, please let me know (via email, Live Messenger or, if you have my number, give me a call) and I'll get you further details.

Before seeing the movie, back when information regarding some of the story elements starting coming out, I was extremely concerned regarding the inclusion of yet another "temporal anomaly&quot...

I'm honored to receive the Microsoft MVP award for being an "exceptional technical community leader who actively shares their high quality, real world expertise with others". Thank you to all of th...

I need a few good artists!